ST. ANTHONY, Idaho — Chad Daybell will face the death penalty when he goes on trial for the first-degree murders of his first wife, Tammy Daybell, and the children of his current wife, Lori Vallow Daybell.

Although she was only 49 years old and in good health when she passed away in October 2019, Tammy Daybell was initially believed to have died of natural causes in her sleep. No autopsy was done at the time, but her body was exhumed in December 2019, when suspicions arose about her death. The autopsy results have not yet been publicly released due to the ongoing investigation.

The children of Lori Vallow Daybell — 16-year-old Tylee Ryan and 7-year-old Joshua “JJ” Vallow — were found in July 2020 in shallow graves on Chad Daybell’s property. While their exact causes of death are still being investigated, JJ was found wrapped in plastic and duct tape, and Tylee’s remains had been dismembered and burned.

The so-called “Doomsday Couple” was indicted in May, but the death penalty determination only applies to Chad’s case. Chad has pleaded not guilty to all charges against him. 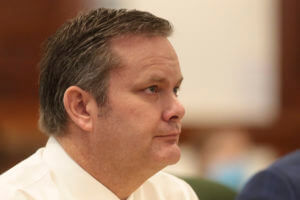 According to prosecutors, Chad Daybell is eligible for the death penalty for the following reasons:

“The ultimate decision to seek capital punishment rests with the State,” the prosecutors stated in their filing, “and after completing the entire process, we determined that the nature and magnitude of these crimes warrant the possibility of the highest possible punishment.”

Lori Vallow Daybell’s case, meanwhile, is on pause while she receives mental health care at the Idaho Department of Health and Welfare. Earlier this year, a psychologist deemed her incompetent. She will go on trial once she is declared mentally fit.

A pre-trial conference for Chad Daybell is scheduled for September 30, 2021. A November 8, 2021 trial date has been set.