CARBON COUNTY, Utah (KSTU) — A guide who helped Donald Trump Jr. bag a black bear on a hunting trip in Utah has been charged with illegally baiting the animal. 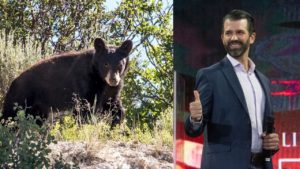 Lemon “personally guided a client on a successful bear hunt” in Carbon County on May 18, 2018, according to charging documents.

A “concerned witness” contacted the Utah Division of Wildlife Resources and said they found “a pile of grain, oil, and pastries” in the area after the hunting party left. DWR agents responded and confirmed that there was half-eaten bait in front of a trail camera with Lemon’s initials and phone number on it.

The witness also said they saw the group hunting with dogs. Both the witness and DWR agents said there was loose straw on a nearby road, which they said is generally used to line the cages of hunting dogs when they are being transported.

Lemon’s client checked the bear in at a DWR station that day.

“The end of the hunt is recorded showing the bear surrounded by a pack of hunting dogs before the client shoots and kills the animal,” prosecutors wrote in the charging document. “Utah law forbids luring bears to a bait station and then pursuing the animal with dogs.”

Utah Code 23-20-3 says it is illegal to “possess or use bait or other attractant to take protected wildlife which is prohibited in this title or a rule, proclamation, or order of the Wildlife Board.”

According to the charges against Lemon, investigators interviewed some of his sub-guides, who said they knew the bear was baited to the area where it was killed that day. One sub-guide confirmed that Lemon “always keeps bear bait spots on this particular property,” and that Lemon told him to “get stuff out there” a couple of weeks before the hunt.

The charging documents did not list Trump Jr., but a report by The Utah Investigative Journalism Project and The Salt Lake Tribune confirmed that he was the client in the hunt that day.

Davis County Attorney Troy Rawlings said the client in the case “was actually a victim and a now a possible witness in a fraudulent scheme to lead the hunter to believe it was actually a legitimate Wild West hunting situation,” according to the Tribune’s report.

The Tribune reports that the DNR confirmed two kills by Trump Jr.: a bear on May 18, 2018, and a cougar on May 19, 2018. Lemon says on his company’s website that he specializes in guiding hunts for black bears and mountain lions with his trained hunting dogs.

While Lemon’s company, “Wade Lemon Hunting,” frequently posts photos of his clients with their big game kills on Facebook, there are none of Trump Jr.’s hunts.

However, the son of then-president Donald Trump posted photos on his Instagram account from a “weekend in Utah with some good friends” on May 19, 2018.

In addition, Wade Lemon Hunting posted photos with Trump Jr. on May 21, 2018, and said they were together to launch an organization called “Hunter Nation.”

One of the organization’s listed purposes is to “educate the public regarding hunting, wildlife, and habitat.”

The Tribune pointed out that the charge against Lemon was filed just before the four-year statute of limitations expired.

“The DNR initially investigated allegations of illegal bearbaiting on the hunt in 2018 and closed the case later that year,” the investigative report read.

The Utah Investigative Journalism Project then requested public records on closed investigations against Wade Lemon Hunting. The Utah Department of Natural Resources provided files on multiple cases dating back to 2009 — but the DNR did not include records of the May 2018 incident because they had decided to reopen the investigation.

According to the Tribune, Lemon was contacted over the phone and said he was surprised by the charges.

“As far as I knew everything was above board,” he reportedly said before ending the call.

The Tribune’s report also outlines some of the past investigations into Lemon’s company.

A judge has issued a summons for Lemon to appear in court on June 13. He is also ordered to check himself into the Carbon County Jail before that date, where he will be booked and immediately released.

This story was originally published May 22, 2022 by KSTU in Salt Lake City, an E.W. Scripps Company.