ATLANTA (AP) — Rappers Young Thug and Gunna remained jailed on racketeering charges Monday in Atlanta following a court hearing in a case in which prosecutors have accused them of being members of a violent street gang that committed multiple murders, shootings and carjackings. 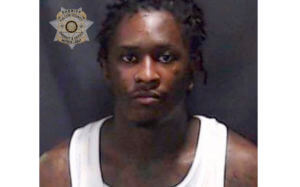 This booking photo provided by Fulton County Sheriff’s Office shows a booking photo of Atlanta rapper Young Thug. The Atlanta rapper, whose name is Jeffery Lamar Williams, was one of 28 people indicted Monday, May 9, 2022, in Georgia on conspiracy to violate the state’s RICO act and street gang charges, according to jail records. (Fulton County Sheriff’s Office via AP)

A judge denied bond for Gunna, whose given name is Sergio Kitchens, after the rapper pleaded not guilty at his arraignment. Fulton County prosecutors asked that he remain jailed, telling the judge some state witnesses have been threatened.

A bond hearing for Young Thug, whose given name is Jeffery Lamar Williams, was postponed until next month, The Atlanta Journal-Constitution reported. Prosecutors say his attorney, Brian Steel, should be disqualified as Williams’ lawyer because he represents others charged in the same case. 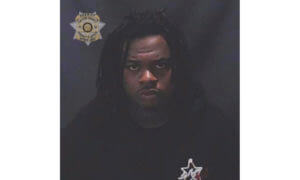 This image provided by the Fulton County Sheriff’s Office shows rapper Gunna, whose given name is Sergio Kitchens. Rapper Gunna was booked into a jail in Atlanta Wednesday, May 11, 2022 on a racketeering charge after he was indicted with fellow rapper Young Thug and more than two dozen other people. An indictment filed Monday in Fulton County Superior Court accuses him of violating Georgia’s anti-racketeering law. It was not immediately clear whether he had a lawyer who could comment on the charges. (Fulton County Sheriff’s Office via AP)

Both rappers were charged in a sweeping indictment along with 26 others for violating Georgia’s anti-racketeering law as members of a street gang that prosecutors say committed violent crimes over roughly a decade and and promoted its activities in songs and on social media.

The indictment includes a list of 181 acts that prosecutors say were committed starting in 2013 as part of the alleged racketeering conspiracy to further the gang’s interests.

Attorneys for both Williams and Kitchens have denied the allegations.

Young Thug co-wrote the hit “This is America” with Childish Gambino, making history when it became the first hip-hop track to win the song of the year Grammy in 2019.

Gunna, who is signed to Thug’s Young Stoner Life record label, scored his second No. 1 on the Billboard 200 album chart with “DS4Ever” this year.