NEW YORK (AP) — New York City has agreed to pay $7 million to a man who spent 23 years behind bars for a murder he didn’t commit, Comptroller Brad Lander said Monday. 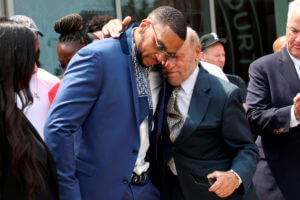 Grant Williams was exonerated last July in the 1996 shooting of Shdell Lewis outside a Staten Island public housing complex.

Williams, 51, had been paroled in 2019. After being cleared last year, he filed a notice of claim, a first step toward suing the city. The comptroller’s office has the authority to settle such claims without court action and occasionally does so, including in the 2014 police chokehold death of Eric Garner.

“This will assist him in going forward and trying to get back on his feet,” and finally putting the ordeal behind him, Cohen said.

He said the state recently settled a separate claim from Williams for $5 million. A message inquiring about the matter was left for state officials.

Lander, a Democrat, said he was pleased that the city was “able to move quickly to a fair and early resolution of this claim.”

The case against Williams had rested largely on the testimony of a couple of eyewitnesses. One was a police officer who chased the gunman — and initially gave a description that didn’t match Williams.

Prosecutors at his trial also sought to suggest a connection between Williams and a baseball cap that the shooter dropped at the scene, though the hat was never tested for DNA that could have pointed to its wearer. It was emblazoned with the logo of Wu-Tang Clan. Williams had worked at the multiplatinum-selling rap group’s Staten Island studio, but his lawyer notes that there was no telling how many hometown fans might have had Wu-Tang Clan hats at the time.

No physical, forensic or digital evidence tied Williams to the crime, and some witnesses testified that he wasn’t the gunman.

Another eyewitness, a friend of the victim’s, had also told investigators that Williams wasn’t the gunman. But police didn’t tell prosecutors about it until after he was indicted, and that witness didn’t testify at the trial.

Williams told reporters at the time that he never lost faith that he would be exonerated and used to tell other inmates they’d see it on the news someday.

“And today is that day,” he said with relatives, supporters and friends including Wu-Tang member Ghostface Killah by his side.

Since then, Williams has been adjusting to restarting his life, Cohen said. He said his client, who earned an associate’s degree behind bars, hopes to help other wrongfully convicted people and help people steer clear of crime.