NEW YORK (AP) — A judge ordered the government Thursday to explain why guards repeatedly flashed light into Ghislaine Maxwell’s cell overnight, an action her lawyers say may have led to a bruise over one eye as she awaits trial in an alleged sex trafficking conspiracy with ex-boyfriend Jeffrey Epstein.

U.S. District Judge Alison J. Nathan issued the order after a lawyer for Maxwell complained that guards threatened to punish her client after Maxwell was unable to explain a bruise above one eye that was noticed on Wednesday night when she saw her reflection in a nail clipper. 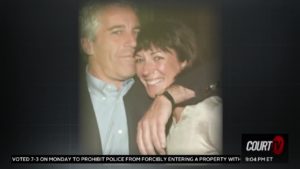 A photo of Jeffrey Epstein and his ex-girlfriend Ghislaine Maxwell (AP Photo, File)

The lawyer, Bobbi Sternheim, said the 59-year-old Maxwell may have gotten the bruise as she tries to shield her eyes from the light that awakens her every 15 minutes as guards make sure she’s breathing.

“While Ms. Maxwell is unaware of the cause of the bruise, as reported to medical and psych staff, she has grown increasingly reluctant to report information to the guards for fear of retaliation, discipline, and punitive chores,” Sternheim wrote.

Maxwell has pleaded not guilty to sex trafficking charges alleging she recruited teenage girls for ex-boyfriend Jeffrey Epstein to sexually abuse from 1994 to 2004. Epstein, a financier, killed himself in a federal Manhattan lockup in August 2019 as he awaited a sex trafficking trial.

A lawyer for Maxwell told a three-judge panel for the 2nd U.S. Circuit Court of Appeals earlier this week that Maxwell is being treated as if she is a suicide risk even though she is not one.

Two judges expressed concern that light is flashed in Maxwell’s cell at night, interrupting her sleep.

A government lawyer conceded to the appeals panel that Maxwell has not been declared a suicide risk as she argued for Maxwell to remain behind bars prior to a trial scheduled for July 12. Defense lawyers have asked that the trial be delayed until next January. 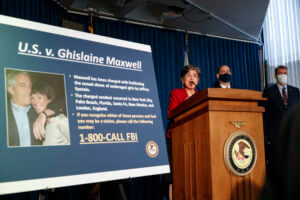 The 2nd Circuit in a brief order upheld the lower court’s decision to thrice deny Maxwell bail on the grounds that she is a flight risk. Defense lawyers had offered to put up $28.5 million and hire 24-hour armed guards to prove Maxwell would not flee. Maxwell, a U.S. citizen, also offered to renounce her British and France citizenship.

The appeals court directed Nathan to deal with any complaints about Maxwell’s sleep conditions.

If so, the judge said, the government should explain the basis for doing so and whether Maxwell can be provided appropriate eye covering.

Maxwell’s lawyer told the 2nd Circuit she had to cover her eyes with a towel or socks because she was not provided with a mask.

Ian Maxwell, Ghislaine Maxwell’s brother, said in a statement that he was “shocked my sister’s guards didn’t immediately refer her for proper medical care.”

“Instead,” he said, “they bullied and harassed her, effectively blaming the victim. The simple solution is to review the round-the-clock security camera footage to see what may have occurred.”

He added: “Apart from whatever happened in this ‘House of Horrors,’ I can report that Ghislaine’s family and friends continue to support her. We are confident, once this is over, it will be the prosecutor who has a proverbial black eye.”