PELLA, Iowa — An Iowa woman is facing life in prison in the death of her estranged husband’s girlfriend.

Michelle Boat, 55, is accused of fatally stabbing 46-year-old Tracy Mondabough on May 18, 2020. Pella police officers found Mondabough slumped in her car when they responded to a call “regarding a possible domestic dispute” behind an apartment complex, according to an affidavit. An eye-witness told officers they heard someone yell, “He don’t belong to you,” before fleeing the scene in a gray 4-door Cadillac.

Investigators tracked the vehicle to Boat, who had previously been issued a no-contact order regarding her estranged husband and Mondabough. Boat had allegedly violated the order multiple times before the stabbing, including assaulting her former partner, according to the Des Moines Register. 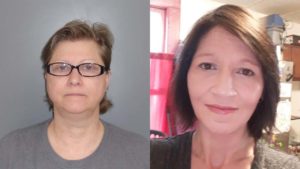 When authorities arrived at Boat’s home, she reportedly “answered the door wearing a robe and having her hair in a towel and indicated she was taking a shower.” Investigators say the washing machine was running and a pair of rubber gloves, “with what appeared to be blood on them,” was found in a toilet tank. Boat’s Cadillac also reportedly had “visible blood on the outside of the vehicle,” according to an affidavit.

Boat was arrested and charged with a Violation of No-Contact Order. The next day, she was additionally charged with first-degree felony murder.